Scott toured the World for over 9 years with the 60s legends, The Searchers, playing to packed theatres & festivals, as well as 'depping' on touring and West End shows.

Scott is available for tours, studio sessions and dep gigs.

Scott can be contacted on:

Scott is a talented musician who plays with feeling, passion and never over plays and was the drummer for the legendary 60s group, The Searchers and The Pocket Gods

Scott found his passion for drums after watching Live Aid in 1985 and was inspired by the talents of Queen's Roger Taylor and Phil Collins.
Scott's extensive musical career has seen him move across all genres and formats, from rock bands, cover/tribute acts to musical theatre and TV, both as a drummer and percussionist.

At the age of 16, Scott joined a signed band (Jump The Gun) which resulted in many studio sessions, videos, radio interviews and tours

Scott has done numerous studio sessions for bands and solo artists as well as being in the house band' for Butlins, Haven Holidays, Park Resorts, Park Dean and Hotels both in the UK and Middle East. Scott has also performed on cruise ships and was employed as percussionist for the 'Elliott Frisby TV Show' and 'Wish- The Magic Tour' and was a dep to Tony Bourke on the hit West End musical by Queen & Ben Elton, We Will Rock You.

In December 2009 Scott was asked to audition for The Searchers and on February 26th 2010, Scott replaced Eddie Rothe as their drummer, until their retirement on March 31st, 2019. 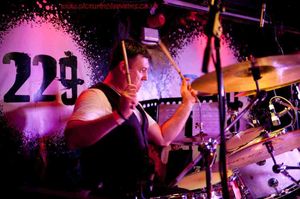